Happy New Year! Let’s hope it’s a good one. So, if you’ll indulge me I’d like to delve into news about my new book the Light, as well as other publishing news and any public appearances I have planned. Also, there will be a monthly giveaway of a PDF of a comic published by Planet Jimbot. In this case the award nominated Wolf Country#1. So without further ado…
the Light 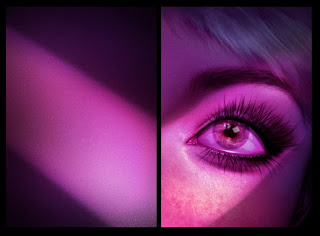 There have been a couple of reviews posted already of my new novel. Up on the book’s Amazon page we have a five-star review from Piaras, who says, ‘It’s a first-class speculative fiction with perfect pacing. Not much is as it appears here, which is just the way fans of mystery, thriller and suspense will want it.’ What more can I say, but Piaras knows his onions.

the Light has also garnered a beautifully streamlined and aesthetically pleasing 9/10 on the website Now Read This! The review goes on to say, ‘Told through a string of narrative viewpoints from the highest and mightiest to the most excluded and lowly, how The Light works – and how it ultimately fails – is beguilingly exposed in a wry and mordant, satire-saturated tale that delves like a forensic exam into the nature of what it means to be human and truly alive…’ And you’ll get no argument from me.
Other Publishing News 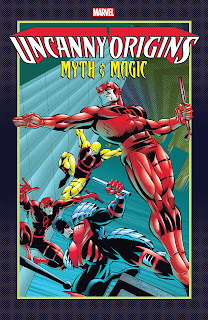 Not that I’m finished with comics. I’m one of the writers on a new Marvel Graphic Novel, Uncanny Origins: Myths and Magic. I write a re-telling of the origin story of Storm. It tells of her birth, the tragic death of her parents, her life on the streets as a teenager and her discovery of her powers all the way through to her ascension to goddess and ultimately X-Man. Marc Campos supplies the art. It’s a really dynamic endearing story featuring one of Marvel’s enduring heroes. 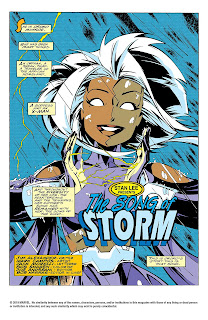 
I’m still officially in a state of hibernation, so no plans to venture out before March, but I’ve already got dates planned in Paisley, Edinburgh, Glasgow, Aberdeen, and Carlisle. And I’m hoping more besides. More on such things in future blog posts. 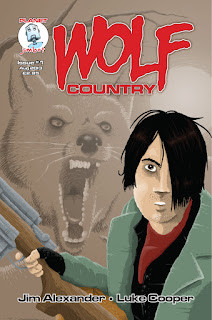 Wolf Country is a comic strip featuring vampires v werewolves in a Wild West setting. It’s a lot more than that, but why should I ruin the surprise? Nominated by the Eagle awards/True Believers for best UK comic. Written by Jim Alexander and drawn by the superlative Luke Cooper. Luke is currently busy working on his magnum opus Hollow Girl published by Markosia.


Thanks for listening. Stay warm (and dry) this January. Chat soon.


GoodCopBadCop is a modern take on Jekyll and Hyde where ‘good cop’ and ‘bad cop’ are the same person. On sale here:
https://www.etsy.com/uk/listing/731747383/


Posted by Jim Alexander at 7:35 AM No comments: Links to this post 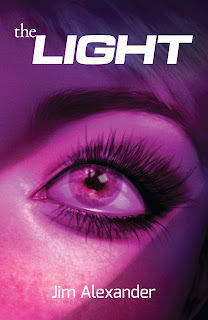 Happy New Year to one and all. ‘So what’s new’ I hear you ask? I have a new novel out called the Light.


the Light explores a world where you wake up and know this is the day you die. How would such a world shape the way we think, our views on each other and society, how we conduct our personal and financial affairs; how we live and how we will die?


You can read the first chapter here:
https://donjimmyreviews.wordpress.com/2019/12/04/extract-from-thelight-by-jim-alexander/


I chat to Meredith Rankin about the book and writing in general:
https://meredithrankin.com/author-interview-jim-alexander-author-of-the-light/


At the start of last year I was promoting my first novel GoodCopBadCop. As we embark on 2020 I’ve moved on to the Light. There’s a diary of my year of 2019 (a little tongue in cheek thrown in for good measure) posted up on Between the Lines:
https://betweenthelinesbookblog.com/2019/12/06/guestpost-from-jim-alexander-author-of-the-light-where-does-time-go-jimplanetjimbot-books-sciencefiction/


Edited by Kirsten Murray. Cover by Alex Ronald. It would be remiss of me not to give you a few links where you can pick the book up. Available in paperback and digital almost everywhere, but for starters here are a couple of Amazon links:

Posted by Jim Alexander at 7:41 AM No comments: Links to this post

Signed copy of GCBC on sale on Etsy 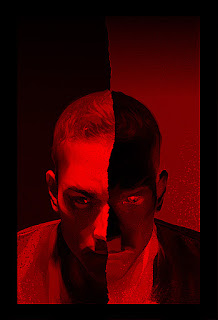 Where has the time gone? No sooner am I touting the first novel, I’m now prepping for the second. The new book is called ‘the Light’, which is as far removed from the first one as you’re likely to get (except for the fact I’m writing it of course).


More on the Light shortly, but in the meantime if you fancy a signed copy of GoodCopBadCop for a tenner (postage included) it’s up on the Planet Jimbot shop on Etsy. Happy to dedicate it to whoever you like making it the ideal pressie for yourself or someone you know who love books:
https://www.etsy.com/uk/listing/731747383/

Alternatively, get your digital copy of GoodCopBadCop for £3.69 including VAT also on Etsy:
https://www.etsy.com/uk/listing/731748691/

Posted by Jim Alexander at 6:43 AM No comments: Links to this post

GoodCopBadCop is a crime novel with a twist. It is a modern crime take on Jekyll and Hyde where both ‘good cop’ and ‘bad cop’ are the same person. This is not a story about a good man turned bad, or a bad man turned good.  Both good and bad arrived at the same time. 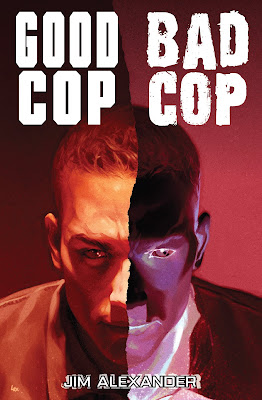 
GoodCopBadCop was originally released as a Graphic Novel, which went on to win the True Believers Comics Awards. The novel delves deeper into the psychological trappings, black humour and surrealist overtones that made the title such a hit with readers. It really gets into the gut(s) and mind(s) of the main character.


Jim Alexander is an award-winning writer who has worked for TV (Metal Hurlant Chronicles) and for DC (Batman 80-Page Giant, Birds of Prey) and Marvel (Uncanny Origins, Spectacular Spider-Man). GoodCopBadCop is his debut novel.

Book is 300 pages and available far and wide. Some links to follow:

Posted by Jim Alexander at 7:55 AM No comments: Links to this post

A potted history of GCBC#1


The first issue of GoodCopBadCop the comic came out in 2012.  I came up with the idea a year earlier.  I was looking for an idea – a high concept even – for my next indie comics venture and I remember seeing an ad on a double-decker bus and suddenly it came to me.  It popped into my head more or less fully formed.  I have absolutely no recollection what the ad on the bus was.  I always assumed one day it would come back to me.  Now I’m not so sure.


GoodCopBadCop is a modern crime take on Jekyll and Hyde where the ‘good cop’ and ‘bad cop’ are the same person.


The same night I put together the pitch, everything came together beautifully, seamlessly.  On a wall in Sauchiehall Lane, I saw a piece of street art in the shape of a human-shaped chalk mark and I thought, that gives me an idea, and the opening story began to form.


It was a Wednesday.  It had to be because I was attending Weegie Wednesday, a monthly networking event for Glasgow-based writers and all types of creative, held at Universal (as it was called at the time).  That was the night I bumped into artist Garry McLaughlin, who himself was catching a quick drink, having been to the cinema previously to watch Terence Malick’s ‘The Tree of Life’.  I knew of Garry, rather than actually knowing him, so I approached his table, introduced myself and sneaked in a quick pitch.  Garry was up for it and there it was.


Funny that, I can remember so much about that night, but not the ad on the side of a bus which in my mind sparked the whole thing off.


The comic featured three stand-alone stories.  It was a sort of ‘proof of concept’ issue.  I wanted to show I could take the idea and play it out.  Put some flesh on the bones.  Garry’s version of DI Brian Fisher remains the definitive one.  His version of BadCop is a brutish one, the character bulking up in front of your eyes.  His rendering of Mrs MacPhellimey with her ‘mushroom cloud’ hair (whose name I took from ‘At Swim-Two-Birds’ by Flann O’Brien) is just superb.  The cover he did for this issue remains one of my favourites.  It's a beauty... 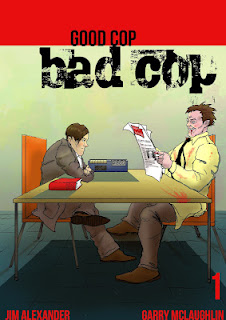 Posted by Jim Alexander at 12:16 PM No comments: Links to this post

…And tell us how long it took to write your first novel.

Okay good question, deep breath – 9 months writing it; 6 months in a drawer; another 6 months of rewriting it; 3 months of editing, proofing and publishing.  After a quick count of all my fingers, toes, and some other appendages, I make that 24 months in total.  Or 2 years, give or take the odd hastily eaten sandwich and dodgy haircut.

The book is still at the proofing stage, but once it’s in and the changes are accepted it’ll be good to go.  I’ve made myself promise myself there won’t be any hurried last minute changes.  I suppose it’s taking the adage to its logical conclusion that a novel is never finished, it’s just published.  Eventually you’ve got to let it go and unleash it onto an unsuspecting, but I hope deserving, world.

Posted by Jim Alexander at 11:58 AM No comments: Links to this post

I've got a novel coming out

I’m about to publish my first novel.  It’s called ‘GoodCopBadCop’.  Some of you might already recognise the title from the brace of graphic novels written by me a few years back, published by Rough Cut.  The novel has given me the chance to really get into the guts of the mind(s) of the main protagonist.  This for me will be the definitive version.  Now I’ve done it, I can move on and write something else.

For those who don’t know, GoodCopBadCop is a modern crime novel in the tradition of Jekyll and Hyde where the ‘good cop’ and ‘bad cop’ are the same person.

The plan is to use this blog to dip in and out and provide a commentary on various facets of the debut novel experience.  If I was to sum up the process in a few bullet points, it might read a little like this:

Like any creative process, the one above isn’t strictly a linear one.  You can, for example, start talking about the book (which could come under marketing) before you’ve even written a single word.

Also, now I’ve decided to go down one publishing route rather than another, I’m treating ‘sending it out to traditional publishers’ as a by-word for putting your ‘finished’ manuscript in a drawer for six months before taking it back out again, ready with fresh eyes for the final redraft, which is itself a by-word for another six months of rewriting.

As I type, the manuscript is with a proof-reader.  I’m hoping the book will be out before the end of the year, probably when everyone is skint in the lead up to Xmas, but I see this project as a slow-burner.  People will still be finding out about the book in six months’ time.

If this is a road trip (bear with me), then feel free to climb aboard.  We'll see where it gets us.

Posted by Jim Alexander at 11:24 AM No comments: Links to this post