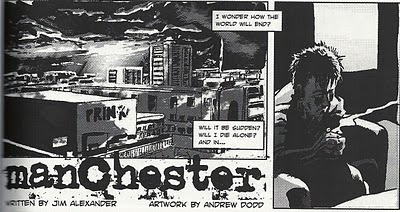 Another year, another number one. 'Manchester' appears in the quite excellent Bob Heske anthology, which takes its inspiration from the Mayan prediction it'll be the end of the world as we know it (in a couple of years time). Think of the big budget movie 2012 and concept wise it's on similar lines - but please don't let this put you off the book! :-)
The remit for artist Andy Dodd and I was to create an 'end of days' riff, which we set in Manchester basing the main character a little on Morrissey. I'd just read 'I Am Legend' by Richard Matheson and I wanted to integrate into the story elements of the last man alive walking through the deserted streets. I wrote the script, but it's up and coming Andy Dodd's art and lettering that brings the strip alive. I still get one helluva kick out of the last page where we answer the question, "Will it be sudden? Will I die alone? And in Manchester?"
'Manchester' is available in e-preview form. The strip features alongside 'Harkington' by Duncan Eagleson and is well worth a gander. Click on the link below. Once there scroll down a little and click on the pale orange button that says 'launch this myebook now!' Then tell me what you think.
http://www.myebook.com/index.php?option=ebook&id=17811
Posted by Jim Alexander at 8:10 PM No comments: Links to this post 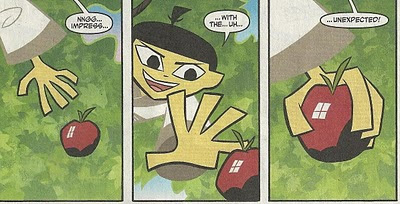 I've said it before but the beauty of Samurai Jack is with one story it can be full-out action, another can be comedy, and 'Like Father' published in CN Action Pack #42. A tale from Jack's youth and his first unrequited love Anna. To impress Anna, Jack climbs the tree of wisdom and acrobatically plucks an apple from its branches. Before he can give Anna the apple, though, some older kids beat him up and take it from him. He then faces his father seemingly in disgrace.

"No...," his father says. "They took it from you, yes, but not without a struggle. I see before me not a twisted wrist but determination...I don't see a scrape to the forehead, only courage. Not a black eye, this says to me honor instead. Son, you make me proud. Never forget."

For me 'Like Father' represents what it's all about to write. To see it on the printed page makes all the sweat and tears worth it. Can't explain the sheer joy the comic page can have for one such as I, you either get it or you don't. I'm hoping it's the former! Not for the first time Ethen Beavers does a magnificent job on the art front. He is my man of the year!
Posted by Jim Alexander at 4:35 PM 2 comments: Links to this post 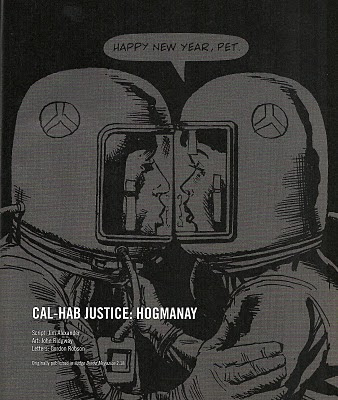 Jimbo's Top 9 of 2009 #3: Calhab Justice: Hogmanay
These days a sighting of Calhab Justice is as rare as a new Hugh Grant motion picture. I mention it as much as I can get away with on this blog (initially I typed in 'blob' there, and was tempted to leave it in). It was with some surprise then when I received an e-mail from Jon Haward informing me that 'Hogmanay' was reprinted in January's Judge Dredd Xmas GN 'Season's Beatings'.
I mean wow. The story still reads well and John Ridgway's art is as superb and uncluttered and smart as ever.
One wag lamented that all 'Hogmanay' involves is some future Scottish judges in plainclothes first footing each other for New Year. Which is kind of the point really. "Japanese whisky, huh?"
Posted by Jim Alexander at 3:30 PM 2 comments: Links to this post 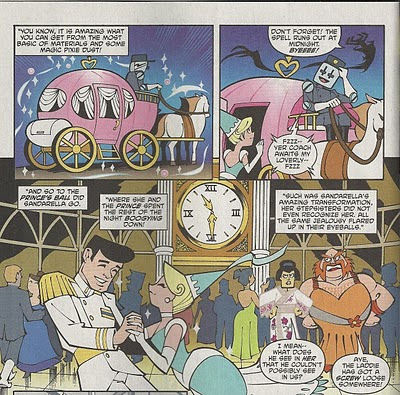 Jimbo's Top 9 of 2009 #4: Aku's Fairy Tales:Sandarella:A Shoe Story
Aku's Fairy Tales is still going strong I'm happy to say. The scenario has Aku telling a fairy tale to two children that puts Samurai Jack in a bad light. The children's names are David (named after my 8 year old son) and Mya (my 6 year old niece).
Sandarella is Cinderella with talking sandals (obviously) brought to life by the superlative Philip Moy. You can find it in CN Action Pack #41. Other Aku stories are based on the Boy who cried Wolf, Sleeping Beauty, and The Labours of Hercules. Text heavy, take an eternity to write, will probably drive me mad one day, but I just absolutely love doing 'em!
Posted by Jim Alexander at 3:00 PM No comments: Links to this post 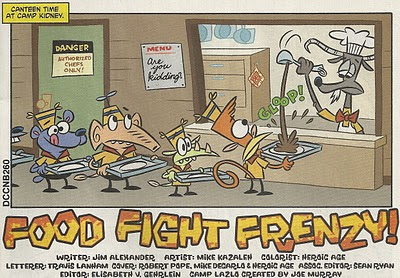 Another opening strip this time for CN Block Party #59, which was the last issue before cancellation. I was a regular contributor, my two main strips being Johnny Bravo and Camp Lazlo. Oh how I loved writing Johnny Bravo. Oh how I lived and breathed the dude. My favourite line: 'Man I'm so hungry I could eat a diplodocus!'

As for 'Food Fight Frenzy!', here's a wee bit of dialogue to give you a - ahem - flavour. "Hmm...is that the sizzle of ham I can smell? And the cooking of baked beans, and of stewed pudding...all rounded off the pungent odor of stale armpit sweat...? Oh the horror, the horror." Messily (but in a good way) drawn by Mike Kazaleh.

Posted by Jim Alexander at 2:30 PM No comments: Links to this post 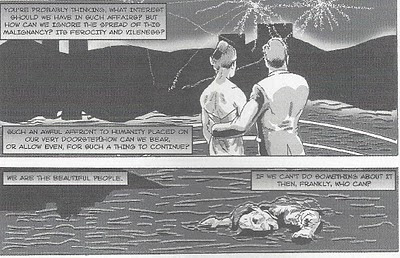 'Beautiful People' is the opening story of Layer Zero: Choices, the annual anthology published by the good folks of Insomnia. Have another two scripts in the bag for Insomnia; 'Growing Pains' for next year's anthology and the 30-page 'Cuckoo' due to appear in 'Focal Point'. We're still looking for an artist on the latter if anyone is interested.
As for number 6 in the list, here's the official blurb: "This is a story of the ‘Beautiful People’, one actor, one actress, two fabulous film stars, who come together in a tidal wave of mutual attraction and self-preservation. It is the ‘Beautiful People’ who rule the world. Essentially a love story, but one in which we ask the questions what keeps them together and what drives them on? Sometimes it’s only an act of terrible violence and sickening cruelty that brings out the best in them. It is only then that we get to see what's inside." Art by Dean Stahl. Sorted!
Posted by Jim Alexander at 5:15 PM 1 comment: Links to this post 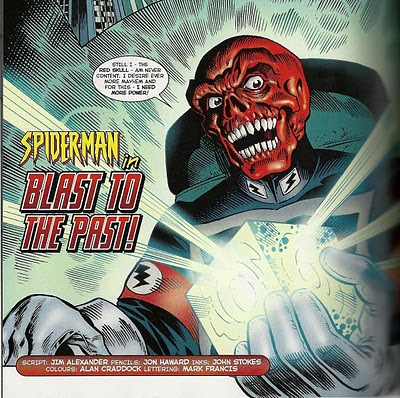 This little beauty has been reprinted several times both sides of the pond. You can catch it in this year's 'Marvel Europe TP'. Originally intended as a means of introducing Captain Britain to a new generation of British comic readers, the re-emergence of the good Captain at the time created quite a lot of hype on t'internet. Quite overwhelming it was. It didn't make myself or artist Jon Haward superstars, but hey it was good the 48 hours or so it lasted.
The story itself has Cap and Spidey up against nasty Nazi the Red Skull armed with the cosmic cube. I suppose the strength of the story lies in how effectively I weaved the origin of Captain Britain into the main plot. It probably irritates the hell out of those who already know it, but to be fair they were never intended to be the target audience. I wrote a follow-up for Panini/Marvel UK, again drawn by Jon, reuniting Cap and Spidey against the Fury this time. Far superior in every way, it was subsequently unheralded and consequently sank without a trace. Now there's a hidden gem worth digging for should you ever have the inclination.
Posted by Jim Alexander at 3:44 PM No comments: Links to this post 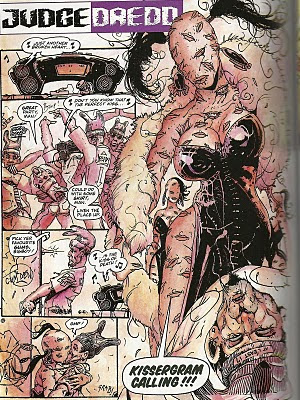 A strange year that saw two of my old Judge Dredd Megazine strips reprinted. One appears in 'Heavy Metal Dredd' a graphic novel published by Rebellion. Originally Heavy Metal was an uncensored take on Judge Dredd, but as time passed became a showcase for artists Simon Bisley and John Hicklenton. I worked on 'Kiss of Death' with the latter. I have a lot of time for John's work and his overlapping mosaic long-limbed style approach. Featuring rampaging psychotic mutant kissergrams, what we have is an elaborate excuse to build up to a killer last line. Which I won't give you here. Ask me next time you bump into me.
Posted by Jim Alexander at 9:32 PM No comments: Links to this post 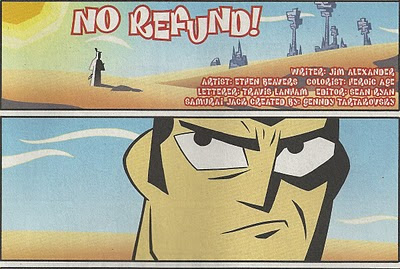 Appearing in DC's 'Cartoon Network Action Pack' #39, 'No Refund' pits Samurai Jack against a trader refusing to give dear old Jack a refund no matter how faulty the force field cloak/grappling gun/escape compass he sold him. Oh and there are robot pirates, which say things like 'Ye swarthy dog! I'll sort ye out with this mechanical axe!' What's not to like? Art by the supremely talented Ethen Beavers.
Posted by Jim Alexander at 8:50 PM No comments: Links to this post

It's that time again. Time to prepare for the end of year festivities and mass Irn Bru and shortbread consumption. Time to look back at the year and revel in one's achievements and forgive one's odd indiscretion here or there. Oh and time for Jimbo's Top 9 of 2009. And I can exclusively reveal there's been enough material published (or re-published) in 2009 to justify another Top 9 featuring everyone's 25th favourite comics writer ranging from Spider-Man to Judge Dredd to Samurai Jack. Please note boy and girls with the exception of Nos. 1 & 6 (which are creator owned) each comic strip listed is copyright its respective publisher. So without further avail…
Posted by Jim Alexander at 7:49 PM No comments: Links to this post

Nice. Innit?
Posted by Jim Alexander at 11:49 AM No comments: Links to this post