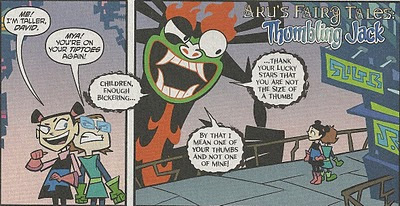 The latest Aku's Fairy Tale tells of a thumb-sized Jack who has, you know, issues. No creator credits on this one, an oversight, but it rarely happens and to be honest I'm not too worried. In any case everyone knows it's written by me. I mean come on who else would come up with the line: "Alas, his father was so poor he did not have two peas to put in a pod." International bankers should hang their heads in shame. Anyhoo 'Thumbling Jack' appears in Cartoon Network Action Pack #47 published by DC. Occasionally one hears talk of a Samurai Jack movie. Now wouldn't that be a good thing indeed?

Posted by Jim Alexander at 1:22 PM 2 comments: Links to this post

Watched the first episode of the new Doctor last night. The highlight was by way of introduction having him taste various foodstuffs ('you're Scottish fry me something' - classic) before settling on fish fingers and custard. I also liked 'the corner of your eye' idea, although they could have done more with this. Doctor's new assistant seems to be a younger version of Donna, although I'm not complaining that much ;-)

Unfortunately the plot seemed to be taken from other episodes - the jumps in time as the Doctor first meets a character as a girl then a woman (Girl in the Fireplace), alien hiding from a galactic police force in a hospital (Smith and Jones), the Doctor using a phone to hack into some world network or other (did it to the Cybermen in Age of Steel, did it to Master with the Archangel Network) and I know his speech at the end where he tells an alien race that the earth is protected is a direct reference to David Tennant warning off the Sycorax in The Xmas Invasion, but it just seemed to force us to compare the new Doctor with the old one (at the moment there isn't a comparison), which hardly seemed fair to the new boy.
Incredibly ironic that one of the most repeated shows on the BBC should recycle quite so many plot lines? Anyhoo my son David enjoyed it and now they've got that always tricky first episode out of the way it's upwards and onwards (hopefully).

Posted by Jim Alexander at 10:19 AM 2 comments: Links to this post